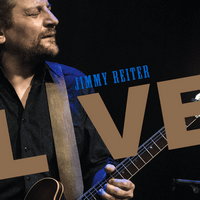 Jimmy has the chops and taste to pull it off without the dreaded Blues-Rock moniker. Not only can he play blistering leads, his rhythm playing is uber-tasty.

This guy has to be one of the finest young blues guitarists I've heard on the European scene for a long time, always exciting to listen to and always plays the real deal stuff, no rocky crap.

Razor-sharp guitar playing and mature and soulful vocals. Modern, urban electric blues from one of the hottest blues guitarists on the scene.

This is the website of Jimmy Reiter, guitar player, singer and song writer.

I have been playing with my band in clubs and on festival stages all over Europe for several years. Previously, I was the lead guitarist with US Blues singer/harmonica player Doug Jay in his band The Blue Jays as well as supporting player for numerous international Blues artists on their European tours.

I released my first solo album, the award winning "High Priest Of Nothing" in 2011, followed by "Told You So" in 2015 and "What You Need" in 2019. After three studio albums, the time had come to release a live CD in 2021. "Live" features 14 favorites from the Jimmy Reiter band's repertoire and was recorded in Osnabrück, Germany and Vienna, Austria.

In 2015 I was voted "best contemporary blues artist in Germany" and two years later, my band won the "German Blues Award" as the best German blues band.

When I'm not touring with my band, I play occasional gigs or record with other artists. I can be heard on numerous CDs by colleagues of mine.

Hope to see you around!

My first live album is packed with almost 80 minutes of highlights from my studio recordings and previously unreleased titles, featuring a two-piece horn section.

In the fall of 2018 we spent a couple of days in the studio to record our new album. "What You Need" consists of 11 mostly original tracks ranging from traditional electric Blues to funky R&B.

There's a nice cover story about me in issue #97 of the German "bluesnews" magazine along with a great album review (5½ out of 6 stars)!

For a list of all dates please check my Tour Dates page.